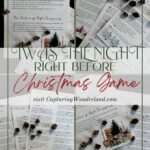 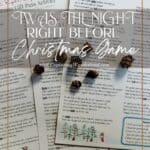 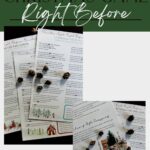 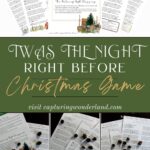 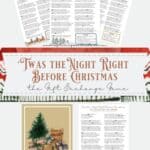 It wouldn't be a proper Merry Christmas without children giggling over gifts under the Christmas tree, fun family gatherings, and hilarious games and antics with loved ones. This year try this great alternate version of a White elephant exchange, 'Twas the Night Right Before Christmas!

Gift-giving is such an integral part of Christmas for so many reasons, but with a large circle of family members and friends, it can drain the wallet dry. So, white elephant gift exchanges are a great way to lower the Christmas gift budget while still allowing us to keep that tradition alive.

The really great thing about white elephant parties is they can include younger children and this 'Twas the Night Right Before Christmas is such a fun way to include the story of st. Nick. The whole idea of Santa Claus adds a bit of nostalgia and magic to the game.

And while we have never officially done Santa Claus in our home, we adore the literature aspect of using a famous poem in our Christmas activities.

White elephant gift exchanges are such a fun Christmas game and are really perfect for family gatherings or a get-together with friends.

I'm sorry to say it took my family a long time to recognize how valuable they are to keep the fun of gift-giving but lower your gift budget substantially. Which is really helpful for everyone's checkbook!

These printables are available as a free download in the Wonderland Subscriber Library. By simply entering your email address and following the prompts in the email. If you're already a member sign in here. Please remember these are for personal use only.

A white elephant gift exchange is a creative, fun, and pressure-free way of Christmas gift-giving. Here are the traditional white elephant rules. Rules ensure the game is good fun for everyone.

These printables are available as a free download in the Wonderland Subscriber Library. By simply entering your email address and following the prompts in the email. If you're already a member sign in here. Please remember these are for personal use only.

As an alternative to drawing names, you could have people draw words from the poem ‘Twas the Night Right Before Christmas. The text of the poem below will have some possible keywords in UPPERCASE as an example for you.

Guests will pick a paper with a word and you will call them out in order to pick small gifts one at a time. And follow the rules above.

This is a super fun version of a white elephant game using a rendition of a very popular Christmas poem Twas the Night Before Christmas by Clement Clarke Moore.

In this game, each guest will pick a gift and sit back down without opening it. Then you'll read the poem out loud. At that point pass the gifts to the person on the left or right when you hear the words right or left.

There are other fun versions of this game

'Twas the Night Right Before Christmas - An Adaptation

This poem is an adaptation of the poem by Dr. Moore, better known as Dr. Clement C. Moore.

'Twas the night right before Christmas,
when all through the house
Not a creature was left stirring,
Not even a MOUSE.

The stockings were left by the chimney with care,
In hopes that St. Nicholas soon would be there.
The children were nestled right snug in their beds,
While visions of sugar-plums danced in their HEADS.

And mamma in her 'kerchief, and I in my cap,
Had just settled right down for a long winter's NAP.
When out on the lawn there arose such a clatter,
I sprang from the bed to see what was the matter.

Right to the window, I flew like a flash,
Tore open the shutters and threw up the SASH.
The moon on the breast of the new-fallen snow
Left a lustre of mid-day to objects below.

When what to my wondering eyes should appear,
But a miniature sleigh, and eight tiny REINDEER.
With a little old driver, so lively and quick,
I knew right at a moment it must be ST. NICK.

More rapid than eagles his courses they came,
And he whistled, and shouted, and called them by NAME!
"Now Dasher! Now Dancer! Now Prancer and Vixen!
On, Comet! On, Cupid! On, Donner and BLITZEN!

So right up to the house-top the courses they flew,
With the sleigh full of toys, and St. Nicholas too.
And then, in a twinkling, I heard on the roof
The prancing and pawing of each right and left HOOF.

As I drew in my head and was turning around,
Down the chimney, St. Nicholas came with a BOUND.
He was dressed all in fur, right from his head to his foot,
And his clothes were left tarnished with ashes and SOOT.

A bundle of toys he had flung on his back,
And he looked like a peddler, just opening his PACK.
His eyes - how they twinkled! And his dimples how merry!
His cheeks were like roses, his nose like a CHERRY!

His droll little mouth was drawn up like a bow,
And the beard of his chin was as white as the snow.
The stump of a pipe he held right in his teeth,
And the smoke encircled his head like a WREATH.

He had a broad face and a little round belly,
That shook when he laughed, like a bowlful of JELLY!
He was chubby and plump, a right jolly old elf,
And I laughed when I saw him, in spite of myself!

With a wink of his eye and a twist of his head,
Soon left me to know I had nothing to DREAD.
He spoke not a word, but went straight to his work,
And filled all the stockings, then turned with a JERK.

Then laying his finger aside of his nose,
And giving a nod, right up the chimney he rose!
He sprang to his sleigh, to his team gave a whistle,
And away they all flew like the down of a thistle.

But I heard him exclaim, 'ere he drove right out of sight,
"Happy Christmas to all, and to all a GOOD-NIGHT!"

A Short History of Dr. Clement C. Moore and his Famous Poem

Clement Clarke Moore (July 15, 1779 – July 10, 1863) was an American writer and Professor of Oriental and Greek Literature, as well as Divinity and Biblical Learning, at the General Theological Seminary of the Protestant Episcopal Church, in New York City.

He is credited and is most widely known as the author of the Christmas poem "A Visit from St. Nicholas", first published anonymously in 1823. It later became widely known as "'Twas the Night Before Christmas" and has been published in numerous illustrated versions in various languages. Scholars debate the identity of the author, calling on textual and handwriting analysis as well as other historical sources.

What Are the Rules For a Gift Exchange?

A White Elephant Gift Exchange has traditional rules of picking a gift or choosing to steal a gift from someone who has already picked a gift. The first person to choose a gift gets an opportunity to steal a gift after all the rest have picked or stolen a gift. Each gift may only be stolen up to 3 times in total.

How Do You Play the Christmas Gift Exchange Game?

Everyone brings at least one gift. Roll the dice to see who goes first. Then gifts will get passed around the table until all gifts get unwrapped. As soon as all gifts are unwrapped the game is over and everyone goes home with whatever gifts they ended up with. Unless you choose to do a crazier version with White Elephant Rules.

What is the Christmas Gift Exchange Game Called?

Other Great Christmas Activities to Add to the Fun

Though this Twas the Night Right Before Christmas white elephant game is bound to be the life of the party, don't discount some of these other activities when it comes to making great memories with your loved ones this holiday season.

Thank you so much for stopping by today! I wish you and your loved ones a very Merry Christmas and a Happy New Year!

4 shares
Manage Cookie Consent
To provide the best experiences, we use technologies like cookies to store and/or access device information. Consenting to these technologies will allow us to process data such as browsing behavior or unique IDs on this site. Not consenting or withdrawing consent, may adversely affect certain features and functions.
Manage options Manage services Manage vendors Read more about these purposes
View preferences
{title} {title} {title}