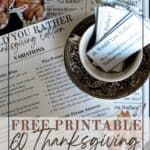 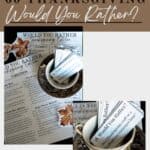 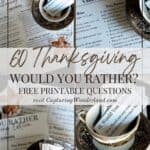 When you gather around the Thanksgiving table this year I've got the perfect game that you can play full of fun conversation starters. The best part is there are no wrong answers and everyone gets to have fun together! Here are 60 Thanksgiving Would You Rather icebreaker questions.

As an Amazon Associate, I earn from qualifying purchases. This post may contain affiliate links. Read my full disclosure policy here.

How Do You Play Would You Rather?

There are a couple of options to play a Thanksgiving Would You Rather. However, which one you choose will depend on a couple of factors like party size and where you're wanting to play it.

Would You Rather: 3 Different Options

The options are kind of limitless, so don't feel boxed in. These are simply some great recommendations to help get you started!

A great option to keep the conversation going is to ask Thanksgiving Would You Rather questions at the diner table.

Sometimes the real fun is the back-and-forth banter that happens when you discuss an odd theoretical situation.

Going around in a circle and having everyone answer is the more traditional way to play Thanksgiving Would You Rather.

It's fun to have all the prompts on strips of paper and just have each person take a turn picking from a bucket, basket, or bowl. They read the prompt out loud and then they start by answering the question themselves.

Then every other person will answer the prompt going around the room clockwise. It's great to encourage chatting in between. It's definitely not a strict answer and move-on kind of game. We want discussion, laughter, and even a few rabbit trails!

In this version, you will split everyone into pairs. And in the end, it kind of becomes a compatibility game.

Everyone gets a piece of paper and a pen before you start.

This is a great version if you have a large amount of younger kids in attendance that you want to participate in the games.

There is a popular Would You Rather Thanksgiving Edition trend on TikTok where the entire family can potentially participate. You don't necessarily have to use TikTok to do this version, either. Simply put on some fun music and split the room in half.

The most fun part of this challenge is the background music. So those participating or not participating can still be having fun being goofy or dancing. And there is definitely no age limit. The more diversity in age the more fun it gets!

Thanksgiving Would You Rather

All of these are completely free to download as a part of the Wonderland Subscriber Library. You can sign up for free and get access to all of my printables and other resources.

Would You Rather Questions for Kids: Thanksgiving Edition

These Thanksgiving Would You Rather questions aren't just for adults, they're a perfect way to involve the kiddos! Here are a few questions just for them!

When you've gone through all 60 questions you can give these other activities a whirl!

What Are Some Thanksgiving Questions for kids?

Most Thanksgiving Would You Rather questions could easily be asked to children or adults alike. Especially since they're all rhetorical and fun-hearted.

What Are Good Thanksgiving Trivia Questions?

The best kinds of questions to ask for Thanksgiving trivia would include things about food, cooking, and iconic Thanksgiving topics like turkey, parades, and football games.

What are some good Thanksgiving games?

Thank you so much for stopping by! I hope I have given you some inspiration, ideas for creativity, and maybe a push to start creating your own wonderland one piece or project at a time.

Don't forget to come back for more great projects like these DIY Projects and many more!